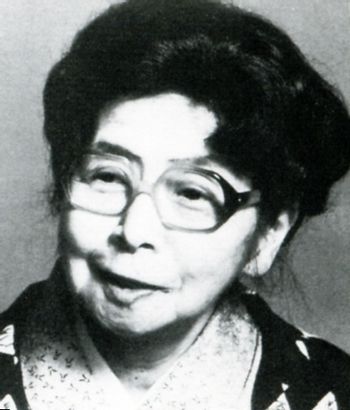 Fumiko Enchi (円地文子, Enchi Fumiko, born 上田富美, Ueda Fumi, 2 October 1905 – 12 November 1986) is one of the most notable female authors of Showa period Japan, both for her prewar plays and dramas and for her postwar novels. Perhaps best known in English for her novels Masks (Onnamen, 1958, trans. Juliet Winters Carpenter) and The Waiting Years (Onnazaka, 1949-57, trans. John Bester).

Inspired both by her father (Kazutoshi Ueda, a notable philologist and contemporary of Basil Hall Chamberlain) and Jun'ichiro Tanizaki, her contemporary and literary hero, Enchi displayed an in-depth knowledge of Japanese classics in her later works in particular and, following in Tanizaki's footsteps, completed a modern translation of The Tale of Genji during the final years of her life.

Enchi's novels are particularly notable for their re-casting and re-examination of female figures from Japanese classical works. Masks, for example, features an in-depth discussion of the nature of Genji's Rokujo no Miyasudokoro (best known for her spirit possession of several of Hikaru Genji's wives and lovers), and a thorough (and thoroughly sympathetic) portrayal of the inner life thereof. In granting interiority to female figures traditionally styled simply as male fantasies (or, to paraphrase Masks, images of the feminine as the object of both man's greatest desire and man's greatest fear), Enchi's works contributed significantly to pre- and postwar efforts to create an alternative, feminist literary canon.