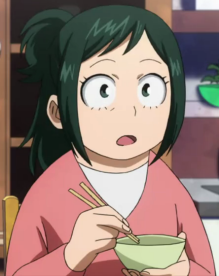 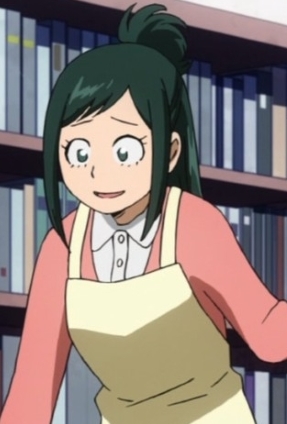 "I... I said something awful to you... I've always regretted that. Back then... I just gave up on you... but you never quit, Izuku. You kept chasing your dreams. I'm sorry, Izuku. So now I'll be cheering you on with everything I've got!!"

Izuku's mother, who raised him on her own while her husband works abroad. Emotional and prone to outbursts of hysterical tears, she's a caring worrywart who's both supportive and protective of her son. Her Quirk allows her to telekinetically draw small objects to her side.

...And my husband breathes fire.
— Inko, Chapter and Episode 1, providing the only reference to his existence in-story

Izuku's father, who has yet to appear in the story. All that is known about him is that he has a fire-breathing Quirk and that he works abroad. 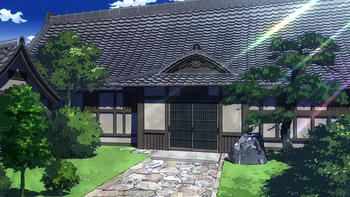 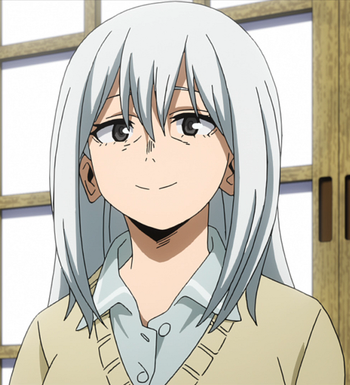 "But you want to be a hero, right? That's fine. You're not... bound by his blood. Decide who you want to become. And be all you can be."

Shoto's mother and Endeavor's (Enji's) wife. According to Shoto, Enji arranged their marriage so that he could create a child with both of their Quirks. Endeavor's mistreatment of her and their children took a heavy toll on her sanity, which led to her throwing boiling water on the left side of Shoto's face due to being disturbed by his growing resemblance to Endeavor. After the incident, Rei was put in a mental hospital, where she remains. Shoto eventually reconciled with her and the two managed to patch things up, but her relationship with her husband remains certifiably trashed, even if Endeavor has made some moves towards atoning. 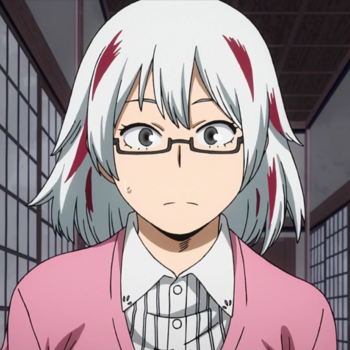 "Ugh... should've known... but with Shoto at U.A. and finally able to see mom again... and now that she's starting to cheer up since you're making an effort... I thought... I thought we might just turn into a real family..."

Shoto's older sister and Endeavor's second child. She's 22 (later 23) years old and has a background in education. Fuyumi is one of the few people who has managed to keep relative order in the Todoroki household, though she expresses dismay over the parental rift caused by Endeavor's spartan personality and worries about Shoto's well-being. 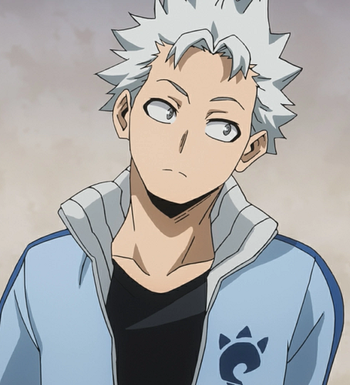 "I get the feeling mom and sis here want to forgive you. But all I see here is the same maniac, who all of a sudden is getting rave reviews. You might look like a changed man, but you're not."

Shoto Todoroki's older brother and Endeavor's third child, who is a 19-year-old college student currently studying medical welfare. Because of his mom's genes, he can easily tolerate cold conditions. He's got a nice personality and wishes the public knew the truth about his father's abusive domestic behavior. 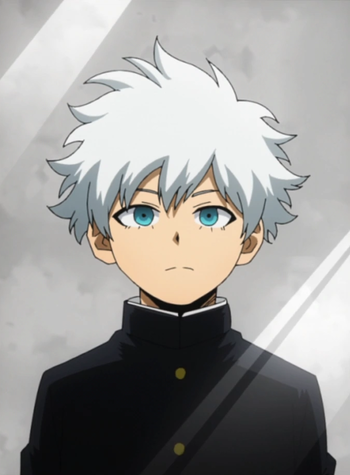 Young Toya
I wish you could be here, too... Toya.
-Enji Todoroki, Chapter 249

Dabi's true identity and the eldest of the Todoroki siblings. He was Endeavor's original heir and assumed to be long dead, but turns up later very much alive as part of the League of Villains. For tropes pertaining to him. 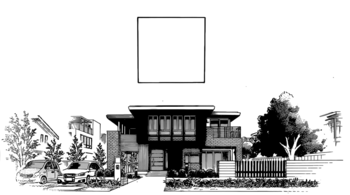 "Wanting to be a hero will cause him nothing but trouble."

Tenko and Hana's father and Nana's son. He's grown up to have a severe distaste for heroics because his mother gave him away to protect him from her hero lifestyle. 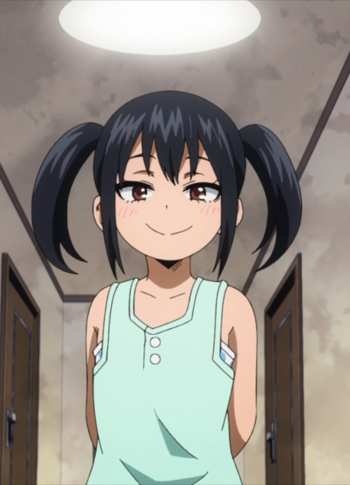 Tenko's older sister, who supported his desire to be a hero. 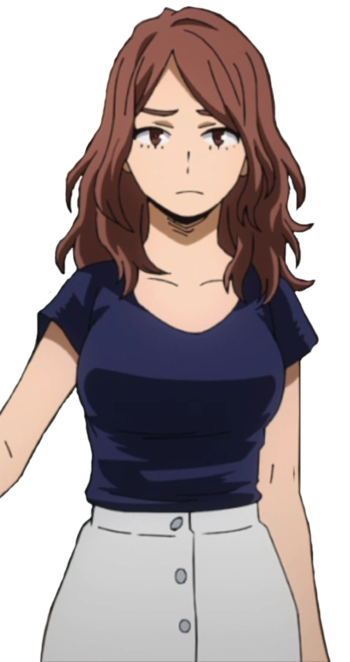 Mako on the left and Chizuo on the right

Tenko's grandfather, Chizuo, and grandmother, Mako, on his mother's side. 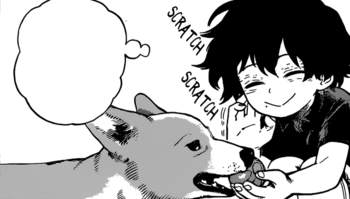 Just a boy and his dog against the world. 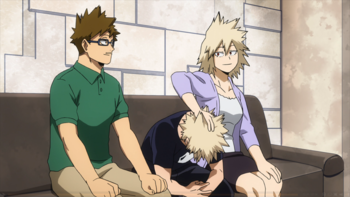 Masaru on the left and Mitsuki on the right.
"Our Katsuki... he's rash on everything he does, and most things come easy to him. During his whole life, people've made a fuss about him by praising him for every little thing he does... so I was so glad to hear what you had to say at that press conference. I was thinking that U.A. really understands our boy."
—Mitsuki Bakugo

Katsuki Bakugo's mother, Mitsuki, and father, Masaru. Both of them have Quirks; Masaru's Quirk is "Oxidizing Sweat" which allows him to sweat nitric acid, while Mitsuki's "Glycerin" lets her produce a smooth liquid from her skin. Katsuki's own Quirk was the result of the two Quirks fusing together, allowing him to form nitroglycerin, as in the main ingredient in dynamite. 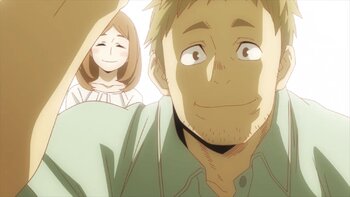 Ochaco's unnamed parents. They barely make ends meet but push their daughter to chase her dreams knowing her true potential will never be reached by helping them lug around building materials with her Quirk. 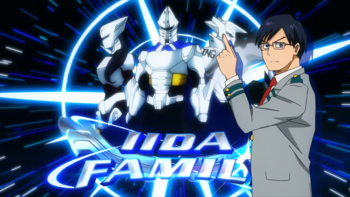 Iida's family, composed of him, his brother Tensei, and their parents. They are a lineage of heroes that preside over a big office called Iidaten. 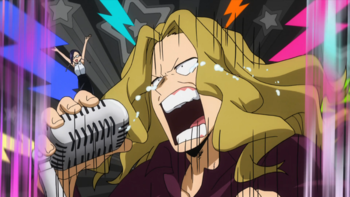 Kyotoku in the front, Mika in the back

Kyoka Jiro's mother and father who work as musicians. 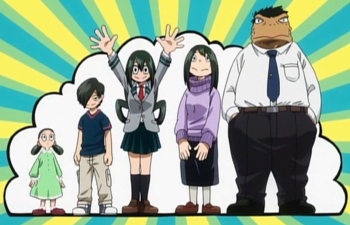 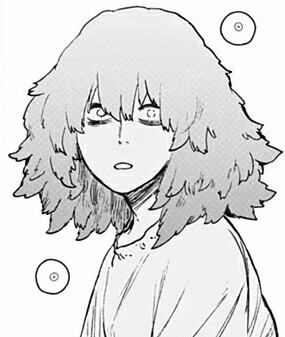 A morose and weak-willed woman who is the mother of Keigo Takami, the Pro Hero Hawks.