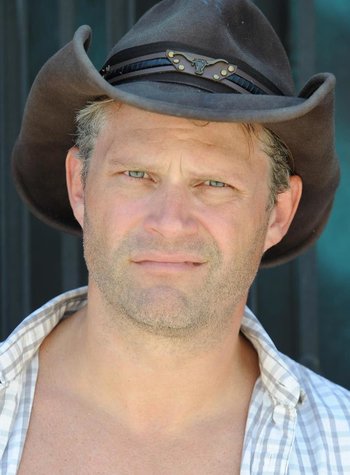 Thank you! Fuck you! The star is here!
Advertisement:

Bryan Massey (born June 13, 1971 in Pontiac, Michigan) is a voice actor who is fairly new on the scene. After doing a few minor characters here and there, his breakout role was in Baccano!, in which he played Ladd Russo, an Ax-Crazy Chicago gangster, to the hilt (and as you can see from the picture, he even resembles the character to a degree). Since then, he has gotten much more acclaim. He has a distinctive, gravelly voice, and so often gets cast in badass roles. Seems to be a nice guy in real life, however. (If a bit unhinged.)

, if you're interested in that newfangled social networking business.