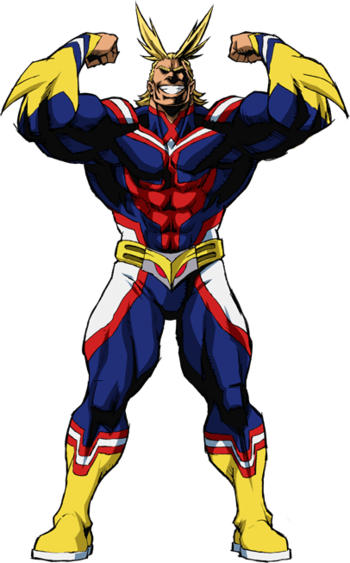 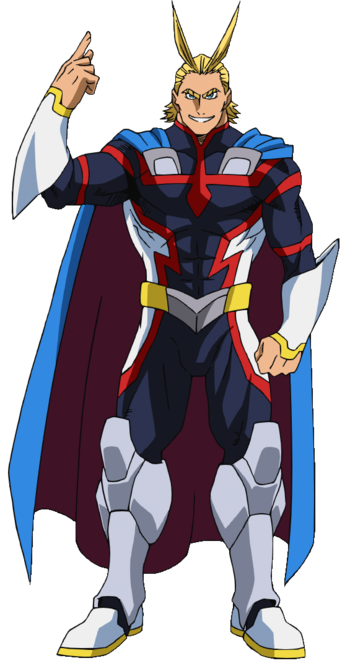 Quirk: One For All (Formerly)

"It's fine now. Why? Because I am here!"
Japan's highest-ranking hero, who acts as a pillar of hope and justice for heroes everywhere to follow. His mere presence strikes fear into the heart of villains all around the world, as none can stand up to his massive power. There's no need to fear! Why? Because All Might, the Symbol of Peace, is here!

Unbeknownst to the world at large, however, is that All Might's great power is not his own, as he was actually born Quirkless. In truth, the Quirk he holds is one that was passed down to him from his mentor, and he's the eighth person to hold it. He's held the power since he was a mere teenager and has used it to become the Symbol of Peace he's known as today. Unfortunately, due to an intense battle with a powerful supervillain in his past, his body has significantly weakened. Now, he can only do hero work for up to three hours a day, and, once his limit is reached, he becomes a lanky, skeletal man who constantly coughs up blood. Only a select few staff at U.A. know this, and even fewer know the true nature of his Quirk. The story of My Hero Academia follows his successor, Izuku Midoriya, as All Might teaches the young man how to hone the immense power he's been gifted with.

"One For All", the Quirk he inherited, lets him stockpile an enormous amount of raw power, allowing him to significantly enhance all of his physical abilities to a superhuman level. This results in unbelievable levels of strength, speed, agility, and durability that make All Might nearly invincible.