Characters / My Hero Academia - All For One

Considering that the very existence of All For One is a massive spoiler, and how connected he is to almost every other villain in the story as well as the Quirks he has handled, all spoilers on this page are unmarked!

The Symbol of Evil
Click here to see him unmasked. 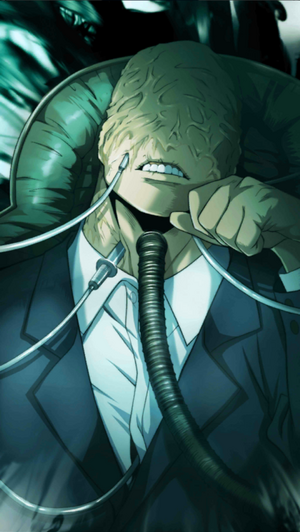 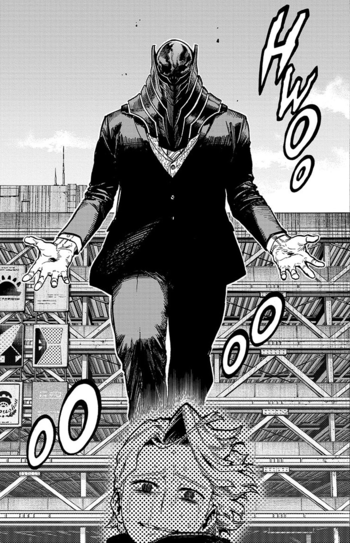 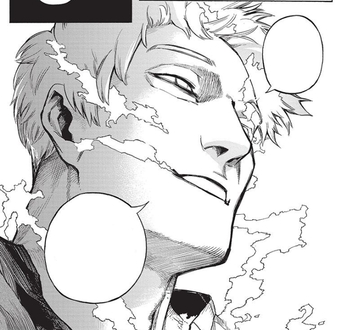 "If it's freedom you desire, then submit to me, my brethren. And bear witness, by my side. This impending void era will give rise to a more perfect demon lord. This will be the story of how I became the greatest demon lord of all!"
The founder and mastermind of the League of Villains, he is an infamous villain believed to be an urban legend. Initially only heard through a computer monitor, he is eventually forced to reveal himself to save the rest of the League from capture, at the cost of his own imprisonment.

All For One has been around since Quirks first emerged. Since that time, he has used his power to amass numerous devout followers, with whom he ruled the Japanese underworld from the shadows for years. He had a younger brother named Yoichi Shigaraki, who opposed him and became the first wielder of One For All. Five years prior to the events of the main story, All Might put a stop to his reign of evil by defeating his minions and eventually the man himself in a battle that left both parties severely injured. Since then, All For One wants to bequeath his place to his protégé, Tomura Shigaraki.

In the aftermath of Paranormal Liberation War, he uses his Quirk vestige to possess Shigaraki which leads to freeing his original body from Tartarus. He then sets out with his protégé to wage war on Izuku Midoriya, marking him as his new nemesis after All Might passed on One For All so he can finally steal it for himself. By the series' final arc, it's revealed All For One intends for One For All to boost his own abilities so he may Take Over the World by making him and his Quirks the only way to provide sustainable resources, forcing everybody to rely on him as a God-Emperor.

All For One boasts of a staggering power in a class of its own due to his titular Quirk, "All For One". With it, he can steal other Quirks for personal use or transfer them to others. He inadvertently created One For All this way.