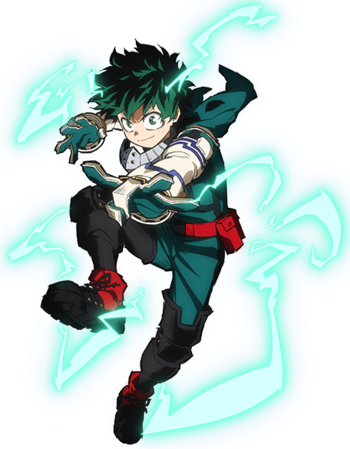 "I have to work harder than anyone else to make it! I'll never catch up otherwise...! I want to be like you...! Like you. The strongest hero."
Click here to see him in uniform

Advertisement:
"A smiling... dependable... cool hero... That's what I wanna be! That's why I'm giving it everything! For everyone!"
The series' main protagonist, a young man with a deep love for heroes. He wishes to become a great hero that inspires peace across the world, much like his idol, All Might. While that dream initially seemed impossible due to him being born without a Quirk, a chance meeting with his idol gives him a chance to make his dream a reality.

Midoriya's desire to be a hero began when he was very young, mainly being inspired by a video of All Might saving hundreds of people during his debut. Unfortunately, due to being born Quirkless, his dream seemed to be completely out of reach. Making things worse, his Quirklessness led to relentless bullying from his peers, especially by his childhood friend, Katsuki Bakugo. Despite all of this, though, Midoriya held tightly onto his dream, never going up hope that he could one day be a great hero. His persistence was eventually rewarded, as his chance encounter with All Might set off a chain of events that eventually lead to All Might taking the young boy on as his successor. The No. 1 hero grants Midoriya his Quirk, "One For All", and sets out to train the boy to be the next Symbol of Peace.

"One For All", the Quirk that All Might passed down to him, allows Midoriya to stockpile an enormous amount of raw power, allowing him to significantly enhance all of his physical abilities to a superhuman level. Unfortunately, his body can't handle the overwhelming power his Quirk gives him, so he can only use a small percentage of its power without hurting himself. He slowly adapts and becomes able to draw out more and more as the story goes along.