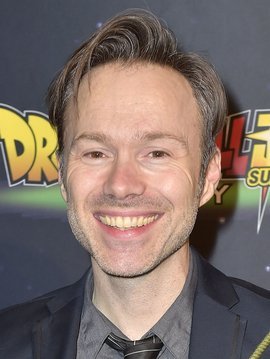 Michael Tremain Sinterniklaas (born August 13, 1972 in Nice, France) started in ADR as a director/voice actor for many North Carolina-based English dubs for AnimEigo back in The '90s, such as Bubblegum Crisis. He later moved to New York, and began collaborating with 4Kids Entertainment, but actually, he's one of the more talented actor/directors they had, simply because he managed to land some really good roles elsewhere, including both Nnoitora Jiruga and Luppi from Bleach, and some occasional roles for Funimation. Western cartoon fans know him best as the voice of Dean Venture of The Venture Bros. and Leonardo from Teenage Mutant Ninja Turtles (2003). He's got a decent range which allows him to play anything from a teenage boy to a Pokemon. He's not as popular as, say, Dan Green, but then again, it's kinda hard to top that voice. Michael seems to attract a lot of crazy fan girls at conventions and other public events.

Besides voice acting he also founded the recording studio NYAV Post, which bases its model on bi-coastal collaboration- shows he directs tend to feature actors from both sides of the States. Dubs for Media Blasters anime series and some Western Animation like The Venture Bros. and Care Bears: Welcome to Care-a-Lot are recorded there, for which he is often the voice director. Kappa Mikey was also recorded there, as well as basically any other of Animation Collective's shows, considering they're just several blocks from each other. He is one of the few voice actors who is quite well-known of a lot of cross region work with a total of three major voice acting locations (the said founded NYAV Post in New York City, Funimation in Dallas, Texas, and many Los Angeles based studios like Studiopolis). Pretty much, the only things missing in the list are Seraphim Digital Studios (Houston, Texas) and The Ocean Group (Vancouver, Canada), but it wouldn't be a surprise if his name started popping up there.note Though it should be noted that doing professional work in a foreign country isn't the easiest thing to get a quick foothold in.

Not to be confused with Sinterklaas.