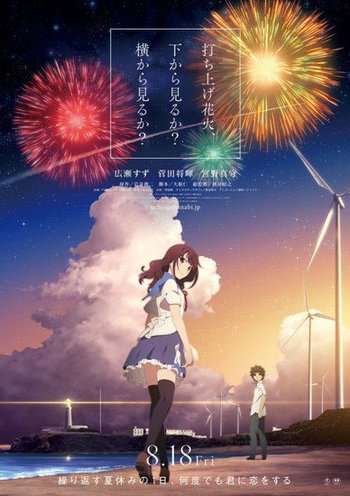 Fireworks, full title Fireworks, Should We See It from the Side or the Bottom? (JP:打ち上げ花火、下から見るか? 横から見るか? Uchiage Hanabi, Shita Kara Miru ka? Yoko Kara Miru ka?) is a 2017 Japanese romantic drama anime film from Studio Shaft based on the 1993 Japanese live action film by Shunji Iwai of the same name. It is directed by Nobuyuki Takeuchi, produced by Genki Kawamura, with a screenplay written by Hitoshi Ohne and featuring music by Satoru Kosaki.

In the Japanese seaside town of Moshimo, junior high schooler Norimichi Shimada (Masaki Suda) goes for summer school with his friends, among them Yuusuke Azumi (Mamoru Miyano). They seek to determine whether fireworks are flat or round when seen from the side by climbing the local lighthouse. Also in their class is the mysterious beauty Nazuna Oikawa (Suzu Hirose). While doing pool-cleaning duty, the two boys are challenged by Nazuna to a race with what is apparently a date at stake. Distracted, Norimichi injures his leg and loses to Yuusuke, but events conspire Nazuna to reveal that she had wanted him to win that they might elope and flee Nazuna's widowed mother, whose remarriage will come with Nazuna having to move away. When things go wrong, a strange bauble gives Norimichi the chance to Set Right What Once Went Wrong, but at what cost?

Alternative Title(s): Fireworks Should We See It From The Side Or The Bottom 2017