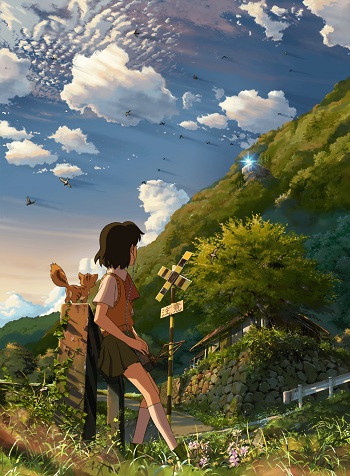 It was a journey to say goodbye.
Advertisement:

Released in May 2011, Makoto Shinkai's Children Who Chase Lost Voices focuses on Asuna Watase, a cheerful girl who embarks on a journey to say farewell. Contrasting his previous films, it is far more spirited and lively, telling of the implications behind life and death, as well as happiness and despair, and the folly of blind determination. With a running time of nearly two hours, it is the longest of all of his works. The film's original Japanese name is Hoshi o Ou Kodomo (in English, Children Who Chase Stars) and was previously known as Children Who Chase Lost Voices From Deep Below.

Asuna is a middle school student. Her father passed away while she was still young, and her mother works long shifts as a nurse. Despite being an excellent student and proficient at household tasks, she is able to find time to visit her secret hiding spot at the top of a hill, and uses a unique crystal her father left behind to listen to radio stations. She encounters a strange melody which remains with her, close to her heart.

Her life changes when she encounters a bear-like creature and is promptly saved by a Bishōnen named Shun, who wields the same kind of crystal Asuna uses. Shun reveals that neither he, nor the "bear", were from Earth; instead, they are residents of Agartha, the underworld where lush fields bloom and where majestic monsters roam. They spend a short period together before Shun passes on, leading Asuna to feelings of longing. It isn't long before Ryuuji Morisaki, a substitute teacher, discusses the legend of Izanagi and Izanami in class, piquing Asuna's interest. She visits him later that day and comes to learn of his intentions, eventually agreeing to accompany him on his journey to Agartha.

Alternative Title(s): Children Who Chase Lost Voices From Deep Below