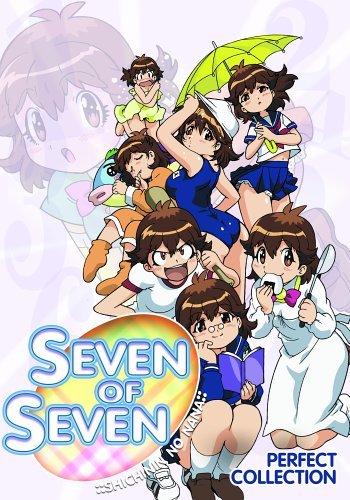 Seven of Seven (七人のナナ Shichinin no Nana) is an anime series that debuted in 2002. It's what happens when you let Yasuhiro Imagawa (Giant Robo, Mobile Fighter G Gundam) create a Shoujo series.

This show is also notable for having Mine Yoshizaki (Sgt. Frog, Arcade Gamer Fubuki, Kemono Friends) do the character designs as well as featuring the animated debuts of 3 of his characters.

Nana Suzuki is an ordinary schoolgirl with a crush on one Yuichi Kamichika. One day, while trying to bake a cake for Yuichi, she stumbles on her scientist grandfather's secret experiment to separate the light of a rainbow into seven crystals. Naturally, the experiment goes awry, and splits Nana into seven versions of herself, each with her own matching rainbow crystal. Now, Nana must find a way to integrate the crystals together, or else all seven of her will vanish.

The Seven Nanas are:

Not to be confused with the manga/anime Nana.

Character page is a WIP.

This show features these tropes: