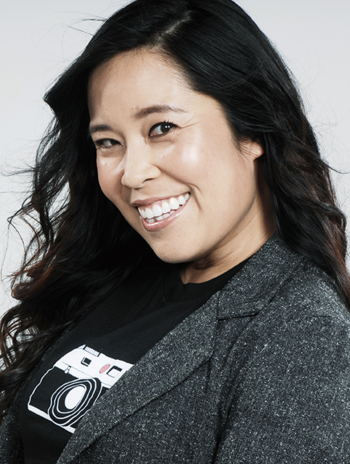 In the name of the Moon, she'll punish you!
Advertisement:

Easy there, girl. Nothing to be shy about.

Small in stature, but big on talent, Stephanie Sheh (Born April 10th, 1977 in Kalamazoo, Michigan) is a voice actress famous for portraying either painfully shy girls, Action Girls, Genki Girls, or even sarcastic grumps. She has won an award for "Best Voice Actress in an Anime Comedy" by the American Anime Awards for her work in Girls Bravo and Haré+Guu. Her characters also tend to be, can you say, well-developed? And strikingly, Sheh is only three apples high.

She is often in anime involving Kari Wahlgren and Johnny Yong Bosch. She also has a tendency to sound just like the voice actor she is dubbing over. As she occasionally works in Dallas for FUNimation, she has been in more and more titles with Michael Sinterniklaas, who was formerly an NY-exclusive actor. Being Asian herself, she has the advantage of knowing how to speak Japanese and can even sing songs in Japanese as well.

She goes by many aliases as well (Jennifer Sekiguchi, Tiffany Hsieh, Lulu Chiang, and Laura Chyu).

She's had her own take on

In response to the 2011 Touhoku earthquake and tsunami

, she organized a fundraiser called We Heart Japan

It will take me 3 days to finish editing this page