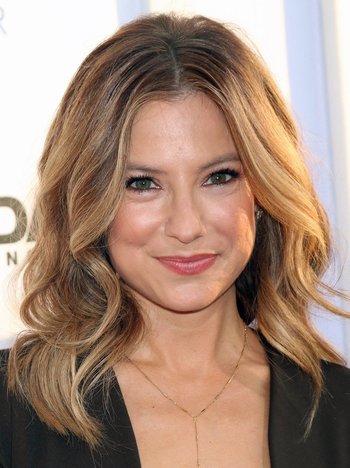 Stephanie Lyn Beard (born August 27, 1981 in Scarborough, Ontario) is a Canadian voice actress best known for her quite babyish, squeaky voice. That sugary sweet voice has earned her the nickname "Sugar" in two ways: her radio host persona goes by Suga BayBee, and the name of her character on YTV's The Zone (where she served as a host from 2001 to 2007) was named Sugar. Oh, and then there's Pink Sugar Heart Attack, in her most famous anime dubbing role, Rini (Chibi-Usa) from the North American dub of Sailor Moon, which is notable in that she is considered to be Rini's "good" voice actress by Sailor Moon fans, and she was preceded by Tracey Hoyt. With that role and her role on The Zone combined, she has become a Pigeonholed Voice Actor and does lots of cutesy anime roles.

Stephanie Beard is cast in: