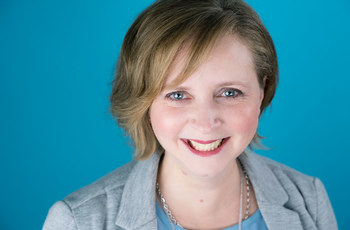 Her very first gig was actually on a live-action Treehouse TV show called Treetown, where she played a character named Rosabelle (although she was credited as Denise Shaw). As Rosabelle, she was often called upon to voice the show promos for the channel, and that's how she came into the world of voice acting.

Since then, she has become a fairly familiar name in Toronto-produced Canadian cartoons, appearing in both major and minor roles and typically as school-age girls. Her most notable appearances however probably include Wayside, Sidekick, Grojband, and Looped. Incidentally, the last three shows are all from Canadian animator Todd Kauffman, and the characters she voices in them are all strikingly alike in many ways (although her Wayside role does have a few similarities to her Kauffman characters).

Her two daughters Abigail and Grace Oliver are also voice actresses. You might recognize them from various preschool-aimed cartoons like Dot., Top Wing, Chip and Potato, and Elinor Wonders Why. And just to be clear, as far as we know, she is not related to Vancouver-based voice actors Mark Oliver and Nicole Oliver.

Outside of performing voices, she also holds workshops to coach child voice actors. She has a website

, where you can learn more about her work in this area.