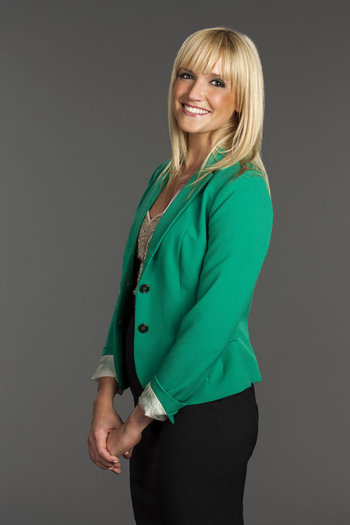 She's most famous for voicing Dumb Blonde Genki Girl Lindsay and the Kawaiiko Katie on the popular Total Drama series, but she also voices some other characters from the same franchise, like fellow Genki Girl Kitty from the spinoff Total Drama Presents: The Ridonculous Race. She's also appeared in a few other Canadian cartoons like Nelvana series Sidekick (as Alpha Bitch Vana Glama) and My Dad the Rock Star (as Bratty Teenage Daughter Serenity Zilla), as well as a few anime dubs. She has a few live-action roles too, but most of them aren't especially notable compared to her animated characters.