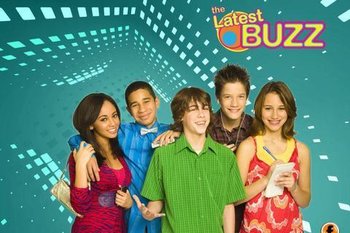 The Latest Buzz is a sitcom about five teenagers who become writers of a failing magazine called Teen Buzz. It is produced by and originally aired on the Canadian Family Channel. The new staff consist of:

Being a Canadian teen sitcom that airs on Family, there are no great surprises here; but there's some excellent UST between the two main couples Amanda/Wilder and Rebecca/Noah, as well as Michael's Ambiguously Gay antics. It was released on DVD after ending in April 2010.