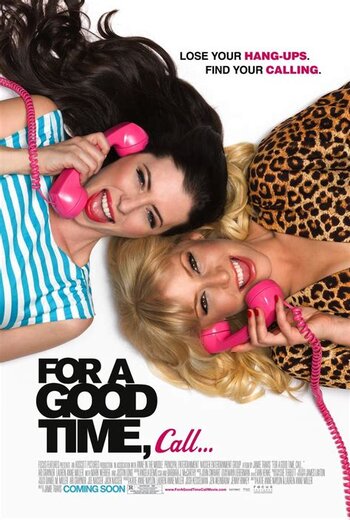 For a Good Time, Call... is a 2012 comedy film directed by Jamie Travis and starring Ari Graynor, Lauren Miller Rogen, and Justin Long.

When her self-absorbed boyfriend dumps her in order to move to Italy, Lauren Powell (Rogen) finds herself in desperate need of a new place to live. As it happens, local phone sex worker Katie Steele (Graynor) is looking for a roommate in order to hold on to her apartment, so she takes Lauren in. Then Lauren's boss suddenly retires and shuts down his firm, leaving her out of a job. Upon discovering how much Katie makes, Lauren decides to help her overhaul her business, thus beginning a partnership that grows into something more.