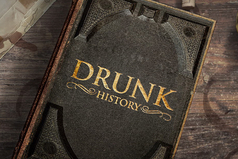 WARNING: The stories you are about to hear are 100% true.
The storytellers, however, are completely drunk.
Advertisement:

Series creator Derek Waters finds comedians, gets them really shitfaced, and has them narrate historical events to the best of their abilities. Their narration is acted out, with the actors lip-synching all the dialogue, including mild slip ups. The recreation is sometimes interrupted when the narrator needs to remember what they were saying, or puke, or lie on the ground.

Drunk History (2013-2018) started as a web series, then was picked up by Comedy Central in 2013. The Comedy Central episodes are typically three shorts long, with initial episodes taking place in a different city and the stories related to that city's history. Later-day episodes tend to be based around a common theme between the shorts apart from the geographic location.

Comedy Central's page for the show can be found here

. Drunk History UK, an officially approved Foreign Remake (insofar as it features British comedians both drunkenly recounting and acting out British history), began airing on the UK and Ireland's Comedy Central on 2015, narrated by stand-up comedian and television host Jimmy Carr. The original series also aired in the UK as Drunk History USA. And yes, there are British viewers who thought the UK version was made first.