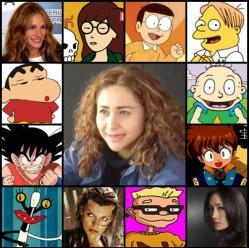 Laura Torres (in the middle) and some of her roles
Advertisement:

Laura Torres Torres (born August 15, 1967) is a Mexican voice actress. She's one of the most recurring voices for young male children in Latin America, although she's also capable of using a deeper tone for Action Girls or other female characters, specially if they're of the Deadpan Snarker type. She began her voice-over career in 1991.

She used to be the regular voice actress for Milla Jovovich and Julia Roberts.

As a former secretary for the National Association of Actors' dubbing division, she led the strike against New Art Dub in 2005 due to a dispute regarding the studio's hiring of non-union actors; it resulted in her being arbitrarily vetoed from the studio.

As the VA for Angelina Jolie:

As the VA for Milla Jovovich: