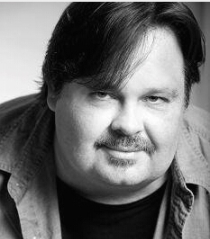 Eric Edward Loomis (born on October 8, 1964) is an American voice actor who has been working mostly in TV/Radio commercials for the past 15 years for such companies as McDonald's, Carl's, HP, On Star, Toyota, Panda Express, and the Coca Cola company in which he was the campaign voice of "Johnny" for their product "Surge" which was nominated for a Clio Award in 1998.
Advertisement:

Having done little animation, Loomis only voiced small roles in the As Told by Ginger TV series for Klasky-Csupo, the Star Wars: Rebellion CD Rom game for LucasArts, Detective Barbie, and Crayon Shin-chan, In 2010, he landed the role of Tony Stark/Iron Man for Marvel Animation in The Avengers: Earth's Mightiest Heroes on Disney XD. Prior to that year, he voiced Iron Man in the video game tie-in to Iron Man 2 and reprised his role in Marvel vs. Capcom 3 (as well as Marvel vs. Capcom: Infinite). As a result from his great performances as the character in the popular Marvel adaptation as well as some video games, fans generally consider him to be the definitive voice actor for Iron Man (aside from perhaps Robert Hays, who voiced the character in the 90s Marvel cartoons).