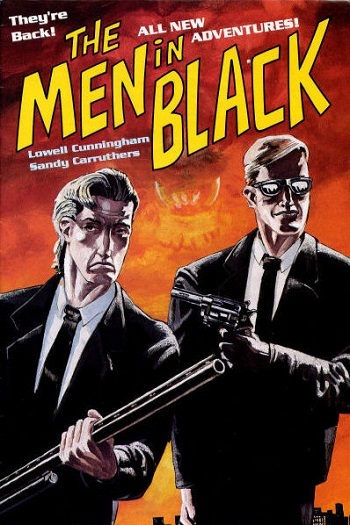 A six-issue comic book series, getting two volumes of three issues each, one in 1990 and the other in 1991. The comics follow the Men In Black, a secret organization that polices supernatural and extraterrestrial beings on Earth. The story centers on new agent Jay, whose partner Kay indoctrinates him into the Agency and slowly works on getting him into the proper mindset. Other characters include Zed (who is never seen, and may or may not be a computer), and Ecks, who goes rogue.
Advertisement:

This comic book was eventually adapted into the Men in Black film series and cartoon.

The series was published by Aircel Comics, an imprint of Malibu Comics, which was eventually bought out by Marvel Comics, which went on to publish three of its own one-shot Men in Black comic books (they were based on the live-action films, rather than the original comics, however; the company did bring creator Lowell Cunningham back to write them as well as retell the very first issue of MiB, though).

To see these tropes you'll need a jacket, tie and glasses: