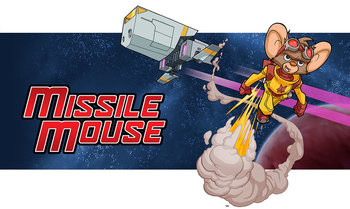 Missile Mouse is a children's comic book by Jake Parker (of Inktober fame), described by him as "a James Bond meets Han Solo for the middle-grade crowd". The series follows the titular Missile Mouse, a top agent of the Galactic Security Agency, and his adventures protecting the galaxy.

The series so far has two books, and has been featured in Flight Explorer.

Missile Mouse has the following examples: