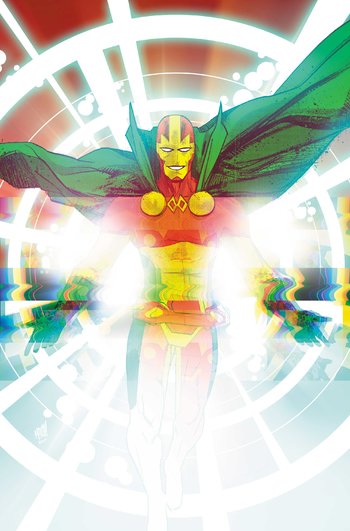 Is he a master of spectacular trickery or is he something more?
Did you actually, really escape?
I mean, death, right?
Did you escape death, Mister Miracle?
...
What?
Advertisement:

Mister Miracle is a 12-issue miniseries by Tom King (The Vision (2015) and Batman (Tom King)) and Mitch Gerads as a part of the DC Rebirth initiative.

This is a tale of Scott Free, better known across the galaxy as the New God, Mister Miracle: escape artist extraordinaire. He has everything any other man in his position could ask for: a gorgeous (and badass) wife in the form of Big Barda, fame, the title of a superhero! It's a good life... right?

But one day, Scott had an incident, but he allegedly claims he was attempting to escape the one thing no one else had ever attempted to escape before: Death itself.

Even as he recovers, one gets the feeling that all is not well with Scott. His half-brother Orion is a bigger jerk than usual. And how are Barda's eyes brown instead of blue, like he remembers? Was Scott really escaping death? Or has the greatest escape artist in the universe found himself in a much bigger trap? A trap not even he can escape from?

The "Mister Miracle" series will not be continued—
Its new and thrilling successor will soon be on sale!
LOOK FOR IT!
Thank you
-Tom, Mitch, Clayton, Nick, Jamie, and Brittany.