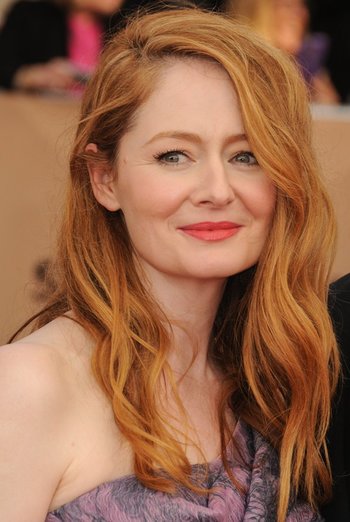 "I grew up seeing a lot of theatre, and it was theatre that really seduced me into acting - not film or television."
Advertisement:

Miranda Otto (born 16 December 1967 in Brisbane, Australia) is an Australian actress, the daughter of actors Barry and Lindsay Otto, and half-sister of actress Gracie Otto.

She began her career in 1986, and has appeared in a variety of independent and major studio films. Her major film debut was Emma's War in 1987.

After a decade of critically acclaimed roles in Australian films, Otto gained Hollywood's attention during the 1990s after appearing in supporting roles in the films The Thin Red Line and What Lies Beneath. Her most well known role to this day is probably Éowyn, the shieldmaiden of Rohan, in Peter Jackson's The Lord of the Rings, appearing in The Two Towers and The Return of the King.

Since her role as Éowyn, she has continued to act in a wide variety of genres and roles in both film and television.