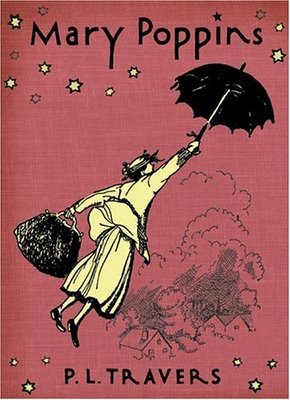 Mary Poppins is a children's book written and illustrated by P.L. Travers and Mary Shepard, respectively, with seven sequels.

Mary Poppins is a Magical Nanny, who enters the life of the Banks family of 1930s London, England via a gust of wind. She acts very stern and vain, but the Banks children (Jane, Michael, John, Barbara, and Annabel) become involved in the most mystical occurrences while in her company.

Disney's 1964 and 2018 film adaptations use some events and characters from the first three books, but also have less episodic plots and some different characterizations (eg, toning down Mary Poppins' sternness in the first movie). The stage adaptation, produced by Disney and Cameron Mackintosh, is a hybrid of the 1964 film and the books.

Other adaptations (apart from the Disney film and musical) provide examples of: