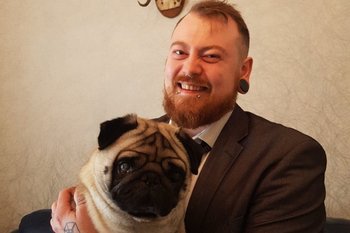 Pictured above: A horrible, evil, racist Nazi.
Count Dankula is the guy holding him.
Advertisement:

, is a Scottish YouTube personality and comedian. His humour videos specialize in Crosses the Line Twice jokes and Rapid-Fire Comedy; however, he also does the occasional video about the nature of freedom of speech, oppression, and tyranny. In September of 2018, he started a new series of videos called Absolute Mad Lads, focusing on Crazy Is Cool historical figures (and occasionally animals). His most (in)famous video by far is "M8 Yer Dugs A Nazi", where he teaches his girlfriend's pug, Buddha, to lift its paw to the phrase "Sieg Heil". This got him in trouble with the law, and he had to pay a £800 fine. He also maintains a second channel

for material reacting to an occasional story.

But before we get into the tropes, it is, in fact, your boi, Raid: Shadow Legends!: