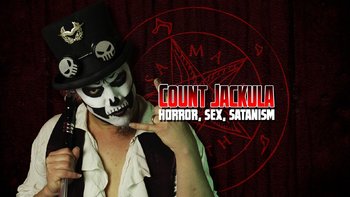 "Greetings fright-knights and monster-girls! It's your old pal Count Jackula from the planet Dracula, where bad movies stalk the night!"
— Count Jackula

(a.k.a. Jack Shen) is a former reviewer on Channel Awesome, the website formerly known as That Guy with the Glasses, and formerly Reviewtopia and Reviewers Unknown. He claims to be a Horror Host space-vampire from the planet Drakula and reviews little known horror movies. His videos can be also be found on The Agony Booth and Geekvision.