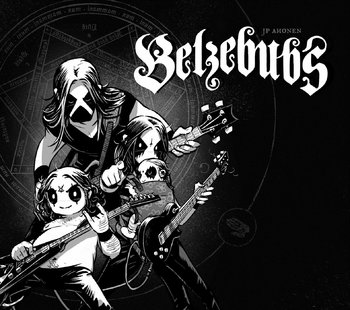 Juggling work and family can be... hell. Calvin & Hobbes meets Call of Cthulhu (or Spinal Tap meets the Addams Family) as the sensationally popular heavy metal webcomic Belzebubs comes to print in a grim, goofy, and gorgeous hardcover.

Belzebubs is a "trve kvlt mockumentary" focusing on the everyday challenges of family life: raising kids, running a small business, and making time for worship. Except the kids are named Lilith and Leviathan, the business is a Black Metal band, and the worship... isn't exactly aimed upstairs.

In a few short years, what started out as improvised social-media doodles has now become a successful webcomic with many fans, drawn by JP Ahonen (Sing No Evil). It combines relatable slice-of-life humor with occult antics and references from metal music to Lovecraftian horror.

The comic can be found on the Tumblr account here

and Cathedrals of Mourning