Recap / My Little Pony: Friendship Is Magic S5 E22 "What About Discord?" 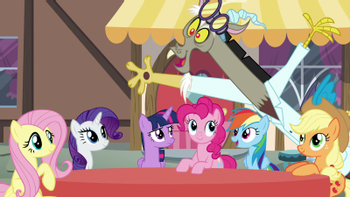 Doctor Discord researching the science of magic.
Twilight Sparkle: I can't believe I missed out on all that bonding!
Spike: I knew it! You are jealous!
Twilight Sparkle: Spike, I'm the Princess of Friendship. I don't get jealous.
Special Guest Star: John de Lancie as Discord
Written by Neal Dusedau
Advertisement:

In her castle, Twilight Sparkle gears up for a three-day weekend of reorganizing all of her books on her bookshelves with Spike, going to stay in her castle for all three days to complete it. When the weekend is over, Twilight and Spike leave her castle, only to meet Discord and Rainbow Dash. The two of them are still laughing about an event they had in the long weekend with the other Mane Six members except for Twilight, and the in-jokes between them only confuse her, since she wasn't there. Twilight even finds the rest of her friends in a similar state, which only draws more and more confusion, since Twilight doesn't get why the jokes are funny. All her friends tell her is that she "had to be there."

Back at her castle, Twilight gets frustrated at not getting the joke. Spike concludes that Twilight is jealous, but she insists that she only wants to understand the joke as part of her duties as the Princess of Friendship. To that end, she invites all of her friends, along with Discord, to recreate the fun event of that weekend. They all spend time at a cafe, trying to recreate absolutely everything down to the smallest detail, but it's no use. Finally, Discord comments that there's one variable that's different: Twilight's presence. No matter how hard they try, they'll never be able to accurately recreate the in-joke for her.

Twilight, growing even more anxious, comes to the conclusion that her friends must be under a mind control spell from Discord, while Spike continues to insist that Twilight is overreacting. Twilight gets a potion to break the supposed spell from Zecora, and insists that her friends drink it the next morning. The Mane Six incredulously tell Twilight that Discord didn't do anything to them, and that she's going too far. Finally, when Discord lets out the in-joke one more time, Twilight finally breaks and admits that she's jealous that she missed out on a good time with her friends, and that as the Princess of Friendship, she feels she must be above petty feelings. The Mane Six assure her that it's okay that she feels that way, while Discord slyly admits that he asked the Mane Six not to invite Twilight. Discord insists that it was not to interrupt her book sorting, but the Mane Six only glare at him. He tries the in-joke again, but the Mane Six don't find it funny anymore, saying that the joke has run its course. They even start up another one with the idea of the Mane Six being under a spell, but Discord doesn't get it, to the point where he feels left out and breaks down, miserable over being excluded as Twilight was. Twilight cheers him up with a peace offering (referencing one of his own inside jokes), and Discord pulls the Mane Six and Spike into a group hug, all of them sharing a friendly laugh.