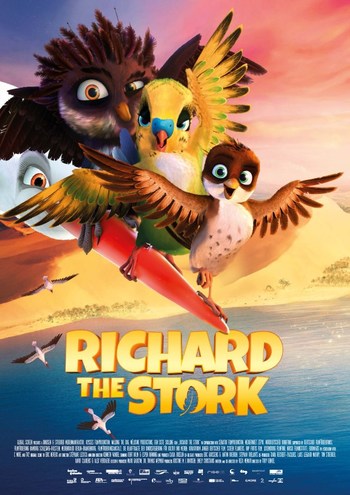 Richard the Stork (known as A Stork's Journey in North America) is a 2017 German CGI animated film.
Advertisement:

It stars Richard, an orphaned sparrow raised by a family of storks. When the storks migrate to Africanote The Americas in the original release, Richard, thinking he is a stork, desperately tries to follow his family on the dangerous journey. On the way from Europe to Africa, he meets new friends, such as Olga the Pygmy Owl and Kiki the Parakeet, and some perils.

Not to be confused with Storks, another animated film also featuring storks on a dangerous trip, but with a different purpose.

Richard the Stork provides examples of: