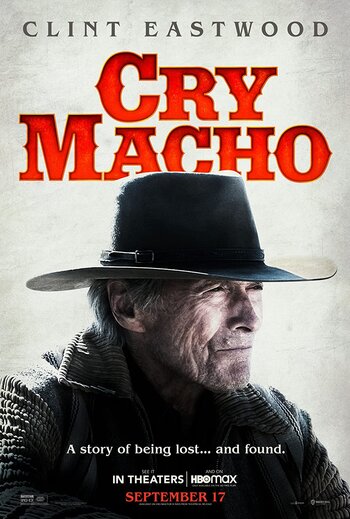 "I used to be a lot of things, but I'm not now."
"This 'macho' thing is overrated. Just people trying to show that they've got grit. That's about all they end up with. It's like anything else in life, you think you got all the answers. Then you realize, as you get older, you don't have any of them."
Advertisement:

Cry Macho is a 2021 American neo-Western drama film directed by and starring Clint Eastwood, with a screenplay by Nick Schenk and N. Richard Nash. It is based on N. Richard Nash's 1975 novel of the same name.

Mike Milo (Eastwood) is an old one-time rodeo star and washed-up horse breeder who, in 1980, takes a job from an ex-boss (Dwight Yoakam) to bring the man's young son, Rafael "Rafo" (Eduardo Minett) home from Mexico. Forced to take the backroads on their way to Texas, the unlikely pair faces an unexpectedly challenging journey, during which the world-weary horseman finds unexpected connections and his own sense of redemption.

The film was released both in theaters and on HBO Max same-day (for a one-month duration) on September 17, 2021.