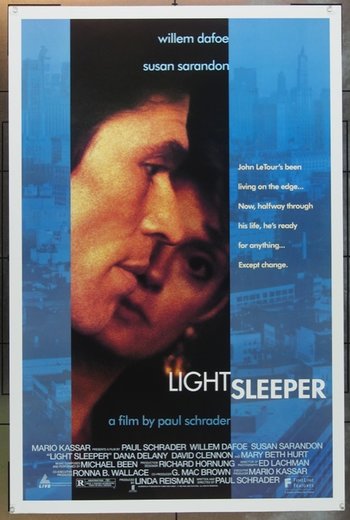 Light Sleeper is a 1992 film written and directed by Paul Schrader.

John LeTour (Willem Dafoe) is a 40-year-old drug dealer in New York, who delivers drugs for his boss and old friend, Ann (Susan Sarandon). They specialize in dealing to upscale clients, like the diplomats that are arriving in New York for a UN conference. Both Ann and John are thinking that they need to go straight; John worries about what he will do in the future while Ann is starting a cosmetics business.

While out delivering drugs on the streets of New York, John meets his old girlfriend and common-law wife, Marianne (Dana Delany). Marianne and John were drug addicts together back in the day, and Marianne, four years sober, is reluctant to associate with anyone from her old life. But after John finds out that Marianne's mother is dying, he goes to the hospital, and meets Marianne again. Meanwhile, a young woman has been found dead of an overdose in the park, and one of Ann's associates, a considerably less polite drug dealer named Tis (Victor Garber), may be involved.

Sam Rockwell appears as a junior drug dealer. David Spade pops up in one scene as a young man who likes to talk about God when he gets high.