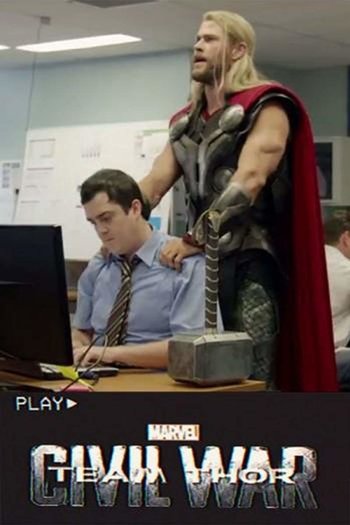 Team Thor is a series of non-canon Marvel Cinematic Universe Mockumentary shorts, written and directed by Taika Waititi and starring Chris Hemsworth as Thor Odinson, Daley Pearson as Darryl Jacobson, Mark Ruffalo as Bruce Banner and Jeff Goldblum as the Grandmaster. Part 1 and Part 2 were initiated during the production of Thor: Ragnarok and meant to humorously answer the question "What was Thor up to when the Avengers were torn apart in Captain America: Civil War?"

Part 1: Following saving the Earth again in Avengers: Age of Ultron, Thor has decided that he needs some "me time", and moves in with his new roommate Darryl in Australia. While he is spending his time either entertaining kindergartners or investigating in the Infinity Stones, he finds out that Captain America and Iron Man seem to have some sort of disagreement. Available on the Captain America: Civil War digital copy.

In Part 2, Thor continues to make Darryl's life hard. He refuses to help in the household and refuses to get a job to pay for his rent because he thinks, as a prince of Asgard and Avenger, it's beneath him. Available on the Doctor Strange digital copy and Blu-ray.

Team Darryl is set after Thor: Ragnarok and features Darryl getting a new roommate: the Grandmaster. Following Topaz's presumed death, the former ruler of Sakaar needs a new assistant and recruits Darryl. While the Grandmaster sets his mind on taking over Earth, Darryl soon becomes tired of the alien's eccentric behavior and starts to miss his old roommate. Available on the Thor: Ragnarok digital copy and Blu-ray.

All the shorts can be watched here