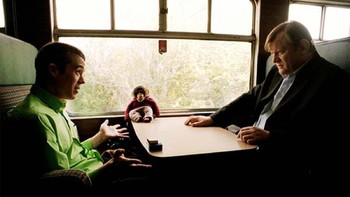 Surprisingly, not a Cymbal-Banging Monkey
Advertisement:

The film opens with a man named Donnelly (Gleeson) being told that his wife died. Donnelly leaves the hospital and boards a train for the ride home. He sits across from a foul-mouthed and garrulous young man (Rúaidhrí Conroy) who will not stop with his endless stream of obscenities. While Donnelly seems amused in spite of himself, the young man's foul talk antagonizes the only other passengers in the car, a married couple who have just lost their infant son to a "crib death." Tragedy ensues, followed by a surprising twist.

No connection to The Six Shooter radio drama.