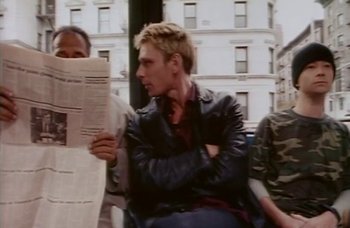 The actor's in the middle
Advertisement:

Speed for Thespians is a 2000 short film (28 minutes) directed by Kalman Apple.

. Elena is a Russian noblewoman who is making a great show of being in mourning for her husband, dead seven months. She receives a visitor, one Grigory. Grigory, it seems, wants payment for 1200 rubles's worth of oats that Elena's husband received from him.

Elena agrees to pay him but says that she doesn't have access to cash and that Grigory will have to wait until her manager returns to the estate in two days. Grigory says that isn't good enough, that he has to pay interest on a mortgage tomorrow and must have the money immediately. An angry confrontation ensues.

All of this takes place on a New York City bus. Really! It turns out that a small troupe of actors is performing Chekhov's play on a New York public transit bus. Or rather, a series of buses, as they keep getting thrown off. Eventually, after finding a more indulgent bus driver, the actors perform The Bear before a series of sometimes bemused, sometimes irritated, sometimes entertained New York commuters.