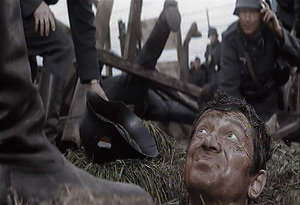 The Great Escape made it look so easy...
Advertisement:

The movie tells the story of a Polish soldier Franciszek Dolas, who - as a result of comical coincidences - is convinced that he started the Second World War. Trying to redeem himself at all costs, he constantly gets into new trouble. In doing so, he finds himself on most of the fronts of the war and eventually returns to Poland, all by luck and random accidents.

It's by far one of the most iconic Polish comedies ever made and an absolute Cult Classic. While originally shot in black and white, it was since colorised and cleaned in 2000, extending the life of the movie further.

There are significant differences between the original book and the film, starting with two completely different main characters, who only share the same surname. Thus while they experience almost the same misadventures, they have different outcomes for each of them.

Tropes occurring in both the book and the film: