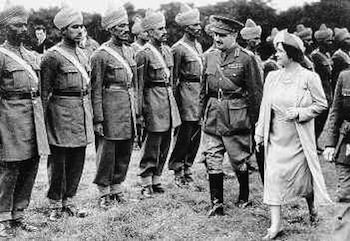 The Honourable East India Company was chartered by Elizabeth I at the end of the sixteenth century for the purpose of extending trade into Asia as well as providing a cheap and diplomatically safe way of intruding into the Spanish Empire's (mostly Portuguese actually but the King of Spain was also King of Portugal at the time) backyard.

Its first captains were typical Elizabethan warrior-merchants seeking to gain profit by honest trade or by more primitive methods. In the process they set up a number of trading posts with the permission of the Mughal Emperor Jahangir, who at that time was the ruler of (most of) India. The Company generally made nice with the Mughal rulers. Some storied incidents such as the pirate Henry Avery's raid on the Mughal ship Ganj-i-Sawai provoked the ire of Emperor Aurangzeb which led to a major diplomatic incident that had the company had to smooth over with the Mughals. Aurangzeb was a military expansionist who was also reversing his family's policy of religious tolerance and this led to a series of rebellions within India, and the rise of competing empires such as the Marathas and the Nizams of Hyderabad as well as other Kingdoms in the East. The Mughal Empire suffered a major body blow in the 1739 Sack of Delhi by the Persian conqueror Nader Shah. This was the Shocking Defeat Legacy from which the Mughals never recovered from. The Emperor's power was disintegrating in the face of European powers and internal pressure. Because of this, the Company began to hire local mercenaries to defend its trading posts. From this seemingly innocuous policy The Raj was slowly born. From its victory in the 1757 Battle of Plassey to the 1857 Mutiny, a series of conflicts took place which led to the growing hegemony of the East India Company.

The Company evolved into a state of its own that often was more like an ally than a subject of the British crown. The East India Company's security guards evolved into a full fledged army; indeed one larger then most European armies and just as well trained and armed. Each time a major war broke out, this provided a convenient excuse to gobble up possessions of the enemy and not coincidentally, to conquer and assimilate local powers accused of being to sympathetic toward said enemy - not entirely without merit, such as in the case of Joseph François Dupleix

. By Waterloo, the Company - and by extension, Britain - was the only power in the subcontinent.

After this came a number of small scale wars and counter-insurgencies and the major rebellion of 1857. English and International historians call it variously the Sepoy Rebellion (Sepoy meaning "Indian Infantryman" deriving from the Urdu term Sipahi which means soldier or conscript). This was caused by discontent in the ranks and a feeling that the Company's Vast Bureaucracy was unsympathetic to their cultural traditions (demonstrably true - see the Greased Cartridges Incident

). A number of regiments revolted and declared themselves for the Mughal Emperor Bahadur Shah Zafar (at that point a figurehead for a Vestigial Empire) as well as a series of rival feudal kings who were chafing under the Company's annexation policies by which it would nullify existing claims to the throne using the "doctrine of lapse" (i.e. the EITC used the lack of heir as an excuse to claim territory, and if there were heirs present, they would arbitrary declare those claims illegitimate with more or less zero reasons other than Screw the Rules, I Make Them! and simple racism). The most storied of these include Tatya Tope and Rani Laxmibhai of Jhansi, the latter of which captured the Victorian imagination as a Lady of War and is an Icon of Rebellion in India.

The East India Company proved shockingly incompetent at managing this crisis which it had more or less created and entirely deserved, and the spectacle of a non-white army attacking English lives and property was incredibly alarming to Victorian Britain and its white supremacist assumptions as well as its prestige as the world's unquestioned superpower. It would simply not do for them to be humiliated internationally by a bunch of darkies in some heathen land. So the Crown sent its own troops to suppress the mutiny with what modern historians consider to be the most punitive expedition unleashed in the history of the British Army. At the time, the English newspapers which controlled the global media favored the English side and focused on the atrocities of the mutineers namely at Cawnpore where English women and children were killed and their bodies dumped in the grave. Indian historians both in the lead-up to Independence, and after the war, focus on the far greater atrocities of the British Army, which involved the sacking and looting of Delhi and Lucknow, with much Rape, Pillage, and Burn of villages, and casualties of citizens in the thousands. It culminated in the exile of the Mughal Emperor Bahadur Shah Zaffar into exile in Rangoon Burma, while his children, the heirs of the Mughal Throne were summarily executed by British officers and their bodies buried unceremoniously at Delhi's Khooni Darwaza (Bloody Gate in Englishnote Said gate has long been storied in Indian history for a series of violent incidents or displays that were said to have taken place at it - the death of the Mughal Princes just made it especially famous and coined its title).

Incidentally, the 1857 Mutiny is still quite controversial in India. We've split it up into a few points for clarity -

So as such, while the 1857 Mutiny and Uprising is a major event in Indian nationalism, and the history of India, it was then and remains later, a highly polarizing event with contradictory and mixed opinions upon its results, which were pretty murky to be quite honest.

The Mutiny was the End of an Age. It marked the end of the East India Company as a N.G.O. Superpower and in so far as the Mutiny was a revolt against the company, it did succeed in toppling the government. It was also the most significant military revolt by Indian rulers, and it was the last time Indian kings and rulers commanded soldiers and armies in battle, and it marked the end of Indian feudalism. After this, the English government ruled directly under Queen Victoria who was bestowed the title Empress of India by Prime Minister Benjamin Disraeli, making the new colony the Empire of India, allowing the Monarch to be an Empress.

The British Indian Army (as it is referred to in Wikipedia) fought in a number of local wars, notably in actions against tribesmen in Afghanistan and along its borders. During the Great Game, the Indian Army would have been responsible for providing the primary defence of the colony if the Russians decided to invade India.

It also performed gallantly in World War I and World War II. It was in these wars that the Gurkhas became famous for their ferocity and valour, as well as being eternally optimistic. It also produced the image of the mustachioed, exotic Indian soldier with lilting accents and total obedience to his British officers, as well as being utterly steadfast on the field. The statement was that you didn't see their backs until they were dead. Their contribution (and for that matter, that of Imperial forces in general) is often overlooked by Western Media, much to the chagrin of the Indians - which is understandable, considering that they contributed over two million men for the British Empire's war machine - all volunteers. And who were the ones picking up the slack - with roughly a million other Imperial troops (Australians, New Zealanders and Burmese forming the bulk of them) as the British Regulars were recovering after fighting the Axis. And being instrumental in driving back Erwin Rommel and his Afrika Korps, and were the ones to give Field Marshal Harold Alexander the distinction of being the first General to conquer Rome from the south since Flavius Belisarius.

The Indian Army had what the British considered a number of colourful eccentricities. More specifically, it smoothly adapted the famous British regimental system to harness local ethnic loyalties into the government's service. One (somewhat) controversial aspect of this was the Martial Race theory which held that certain cultures provided better soldiers. Those who favoured this claimed that these were people who grew up in tough places where they Had to Be Sharp. Others point out that this was simple bigotry that helped the English Divide and Conquer. Of course, not all of the Army was from "Martial Races" and some notable regiments like the Bombay, Bengal and Madras Sappers and Miners - who are generally regarded as the absolute best - were from "non-Martial" cultures. By World War II the demand for Cannon Fodder was so high that even "Untouchables" castes or tribes were fighting and accounted themselves fairly well. This "dilution" does not seem to have hurt the efficiency of the Indian Army, although it paled compared to the institution of Subhash Chandra's Bose rebel Indian Nationalist Army which despite being numerically smaller, and allied with Imperial Japan was the first Indian army without caste and religious segregation that was also open to women. The modern Indian army resembles Bose's structure more than the British.

At Partition, it split itself to give birth to Indians with Iglas and Pakistanis with Panters.

Rudyard Kipling is the Trope Namer because he frequently wrote about this subject.