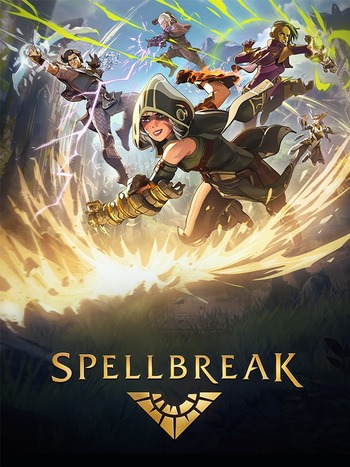 Spellbreak is a magic-themed Battle Royale Game developed and published by American studio Proletariat for PC, PlayStation 4, Xbox One, and Nintendo Switch. The game entered early access in early 2020, with a full free-to-play release following on September 3, 2020.

Players assume the role of a Vowbreaker; one who defies the Vow Mandate, which outlaws all magic under the justification that magic is a corrupting influence. The primary setting of the game is known as the Hollow Lands, which, after a past event known as the Fracture, is ravaged by strange phenomena known as Spellstorms. Now, the Vowbreakers take up magic to find what caused the Fracture, and a way to stop the Spellstorms.

So far, there have been three game modes introduced: the traditional Battle Royale mode, the currently vaulted Clash, a combination of battle royale and deathmatch which allows players to re-enter combat after being KO'd with their gear intact, making it an ideal mode for newcomers, and Dominion, where two teams of five Breakers fight over three control points, all the while earning boons from a mysterious merchant and fending off hostile Vowguard troops.

In June 2022, Proletariat announced that the game would shut down in 2023 due to them being acquired by Blizzard Entertainment.