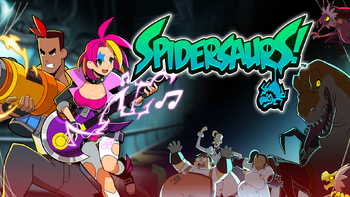 Spidersaurs is a Run-and-Gun shooter game by WayForward Technologies. Originally an Apple Arcade exclusive from 2019, it has since been released on the Nintendo Switch, Steam, PlayStation 4, PlayStation 5, Xbox One, and Xbox Series X|S on July 14th, 2022.

In an effort to solve world hunger, InGest Corp creates a new food source which suddenly goes horribly wrong when said food source becomes a hybrid of half-spider, half-dinosaur monsters that are now on the loose. The only ones who can stop them now are punk rocker Victoria and officer-in-training Adrian.