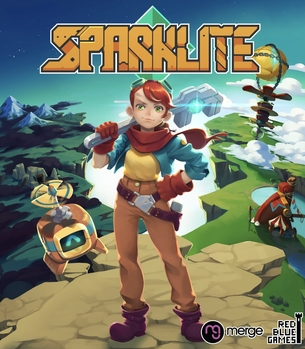 Sparklite is a top-down Zelda-style Action-Adventure game with Procedurally Generated Levels, released on November 14th, 2019 for PS4, Nintendo Switch and on PC through Steam, with an Xbox One release the following day.

It is set in a world called Geodia, where an evil Baron is seeking to Take Over the World through exerting control over the mysterious glowing mineral with immense powers called sparklite. Luckily, a hero named Ada arises, and discovers that sparklite is linked to the world's Founding Stone, whose five seals are now unbalanced, and restoring the Seals will place the world back in order, and stave off the threat from the Baron.