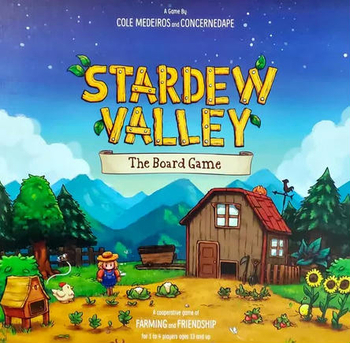 Stardew Valley: The Board Game is a 2021 Co-Op Multiplayer adaptation of the videogame of the same name, for one to four players. Like the original game, the player(s) are tasked with taking over their deceased grandfather's farm, but this time they have to accomplish their mission goals (four of Grandpa's goals and six Community Center bundles) in a single year, which is composed of 16 turns during the game.

The game was worked on by the video game's developer Eric Barone and independent board game designer Cole Medeiros. The game proved so popular that its first two printings were sold out immediately.

The game's rules can be found here