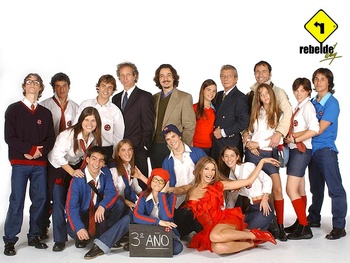 The main characters of the first season
Advertisement:

Rebelde Way was an Argetinian soap opera aimed at pre-teens and teens that told the adventures and misadventures of a bunch of teenagers boarding at the fictional Elite Way School in Argentina. It began airing in the 2002 and told typical issues such as love triangles, teen bands, and more. It turned into a massive hit in Argentina and the rest of South America, even finding small success in Spain, Romania, Portugal, some parts of Eastern Europe, and Israel.

The series told the stories of Mia, Marizza, Manuel and Pablo, four different teenagers who often didn't get along with each other, but they miraculously bonded with each other due to their shared loved of music. They formed a band, Erreway (which later turned into a real life band, the members being the same actors that played the four teens in the series, and had quite a success in real life). Along the way they had to deal with school, strict parents, turbolous romances and much more.

The series became so popular that different countries began airing their own spinoff versions of the series, like Mexico did with "Rebelde".

.And if you're an English speaker who's curious but doesn't speak Spanish:[2]