Manga / Kiss and White Lily for My Dearest Girl 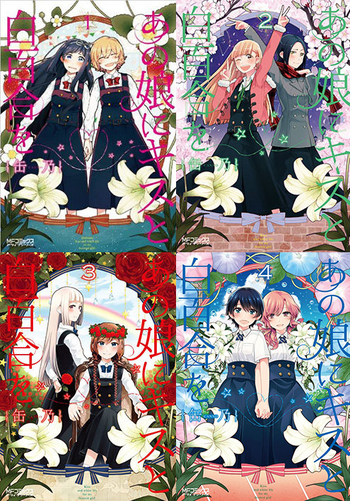 The first four pairings of the series: Ayaka and Yurine, Izumi and Chiharu, Towako and Yukina, Mizuki and Moe.
Advertisement:

Shiramine Ayaka is perfect. Beautiful, brilliant, kind and a hard worker: she is the model student of Seiran Academy, and her sole ambition when she arrives in the high-school section is to remain her perfect self. But to her shock, another girl named Kurosawa Yurine steals the top seat from her effortlessly—literally effortlessly.

At first Ayaka is only mildly annoyed, but after she shows her trademark kindness to the aloof Yurine, the latter falls head-over-heels for her and starts clinging to her at every occasion. After which Ayaka becomes obsessed with taking back her title of top student, while desperately trying not to fall for her new rival, who shows her no end of affection. Because Yurine sees Ayaka as the girl who can defeat her and make her feel "normal".

Well, this is not that story.

…Okay, it is, but while the above summary is the starting point, it quickly becomes only a part of an ensemble story, where the character focuses and points of view regularly change. Most chapters are actually focused on other girls of Seiran Academy, with Ayaka and/or Yurine being in a supporting role.

Starting from volume 2, the structure becomes "one volume = one new couple", with Ayaka and Yurine's story arc serving as a sort of vague connecting thread between those self-contained arcs. Thus, while there is a sense of continuity and the protagonists' relationship gradually evolves, it is also possible to read each volume more or less independently. The tone switches between humoristic and melancholic, but remains light and sweet. No gayngst or earth-shattering drama here.

Ano Ko ni Kiss to Shirayuri wo ("A Kiss and a White Lily for Her"), or AnoKiss for short, is a girls' romance series by Canno, an artist from the doujin circle "Hyper Kettle Yesterday" (with the artists Kawauchi and Nega). It was launched in November 2013 in the Monthly Comic Alive, the same magazine that published Whispered Words − making it one the very few yuri series published in a mainstream magazine at the time.note Interestingly enough, in a crossed interview with Canno, Nakatani Nio noted that the series' artstyle and writing felt more like shonen than shojo. It is published in English by Yen Press since 2017, as "Kiss And White Lily For My Dearest Girl." You could say that the series is a sort of crash course through the various types of yuri couples, while putting a little unique spin on them at the same time. The series concluded in 2019 with a total of 10 volumes.

In 2015, some of Canno's doujin works from 2012 and 2013 were released in a volume titled Cider to Nakimushi, full with an updated art, published by Yuri Hime.

Compare Comprehensive Tovarisch by Arata Iri, which has a similar premise, but is much more hectic.

The character focuses in each volume are as such:

Ano Ko ni Kiss to Shirayuri wo contains examples of: