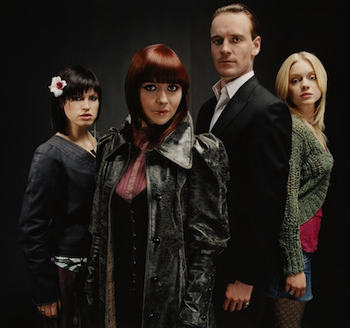 From left to right: Thelma, Ella, Azazeal and Cassie
Originally marketed as The British Buffy, which was true in much the same way that Coupling was the British Friends (which, again, was part of the early hype), Hex was one of Sky's earliest original drama series. It told the story of a blonde schoolgirl named Cassie who gets supernatural powers with which to fight demons, but has her style cramped by her falling in love with the leader of the aforesaid demons, Azazeal, discovering that her destiny is to give birth to his child, the Anti-Christ.
Advertisement:

Following the departure of Cassie's actor, the series was retooled into a show about a kickass red-headed immortal schoolgirl named Ella who has supernatural powers with which she fights demons. Unfortunately she was blind-sided by the Anti-Christ (Cassie's sprog Malachi)'s evil plans, the demons won, and the show's second (and final) season ended with the cast divided into the evil, the very dead, and the fleeing in terror.

In both seasons, Thelma the ghost was the heroine's sidekick and speaker of memorable quips.

Don't confuse this with the 80's horror flick, HEX.

Of course, you might be thinking of a different Hex...