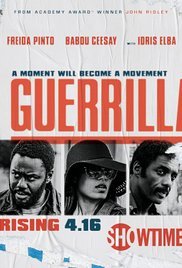 Guerrilla is a 2017 British miniseries about an activist couple in London c. 1971 during a time of social turmoil when Britain has recently passed the Immigration Act 1971 as law. It stars Idris Elba, Freida Pinto, Rory Kinnear and Babou Ceesay. Jas (Pinto) and Marcus (Ceesay) are members of the British Black Panthers, working now to politically educate black prisoners. Due to facing high unemployment and police brutality, many black and Asian Britons are angry at the government.

After a demonstration against the British National Front ends with the police beating the black protesters, one to death, they become infuriated and adopt increasingly radical methods in their struggle against social injustice in Britain.

The show is a collaboration between Showtime and Sky Atlantic. It's a series of six episodes.