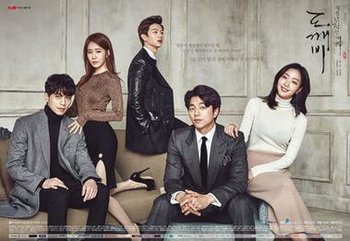 Kim Shin is a goblin who is also a trickster and protector of souls. He lives with an amnesiac grim reaper in charge of seeing off deceased souls. One day Kim Shin meets Ji Eun-tak, a high schooler who can communicate with ghosts, who claims to be his bride.

Guardian: The Lonely and Great God contains examples of: