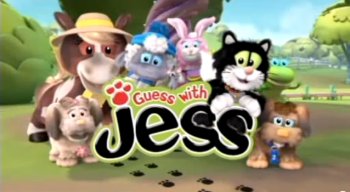 "Hello, I'm Jess! Come and guess with me!"
Advertisement:

Guess with Jess is a British/Canadian educational programme for toddlers featuring Jess from Postman Pat as the central character. Set at Greendale Farm, the series explores Jess' interaction with his friends as they discover the world around them. To date three DVDs have been released: Exploring Winter Wonders, Spring Surprises and Sunny Day Discoveries. These have not been released commercially in the United States, but are available at some libraries. The complete series is also available on Hulu.