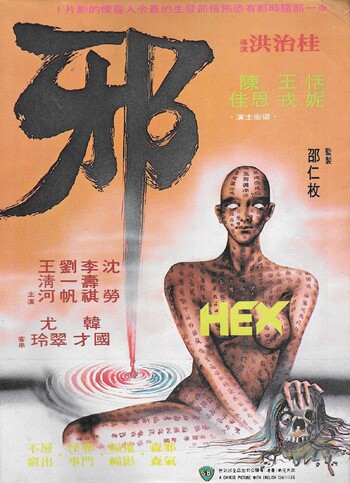 This shot IS in the movie, by the way. In the last 5 minutes though…
Advertisement:

Hex is a 1980 supernatural horror film made by Shaw Brothers, directed by horror-meister Kuei Chi-hung of The Boxer's Omen and Bewitched (1981) fame.

Unlike Kuei's later horror-gorn films which are set in contemporary times, this one is set in the past — specifically Shanghai in the 1930s, where a once-wealthy family, the Chans, have fallen on hard times. With most of their family members leaving the country or dying of diseases, what's left of the clan's treasure is under possession of Lady Chan Sau-Ying, the only daughter who is stricken with tuberculosis.

The son-in-law, Yeung Chun-yu, married himself into the Chans for their wealth, but with the family dying off left and right and denied of the inheritance which is sealed in the Chan family's vault, Chun-yu is determined to make his wife, Lady Chan, suffer and remain as miserable as she could until her death. But the arrival of Lady Chan's close friend, Leung Yi-Wah from the rural countryside to find a job, might turn the long-suffering wife's fate around... but NOT for the better.

What starts off as a Foreign Remake of the French film, Les Diaboliques, however took a turn into Mind Screwing insanity as an ancient family curse resurfaces.

Kuei Chi-hung would direct two sequels, Hex After Hex and Hex vs. Witchcraft, but the follow-ups are actually screwball horror-comedies which are mostly In Name Only.

Not to be confused with the novel, TV series or the video game.