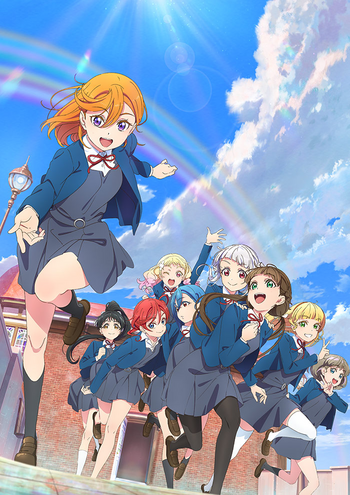 "Song for me! Song for you! SONG FOR ALL!"
Advertisement:

Love Live! Superstar!! is the fourth anime series overall in the Love Live! series. It premiered on July 11th 2021 as part of the Summer 2021 anime season. The series is notable for having an open audition to voice the lead character, Kanon Shibuya.

The building of the defunct Jinguu Music Academy is set to be demolished but an alumni bought the school and reopened it as Yuigaoka Girls' High School. Due to its roots as a music academy, Yuigaoka has a dedicated music course alongside the general course.

Kanon Shibuya, a talented singer, plans to enroll into the music course but failed due to her inability to sing in front of people ever since she was a child. Since then, she has resigned herself that her future in music is over. However, a chance encounter with New Transfer Student Keke Tang leads her into discovering school idols, reigniting her passion for music and hoping that she would be able to overcome her shortcoming.