This is the character sheet for μ's from Love Live!.

NOTE: Additional supporting characters pretty much in progress!!! Also, their other characteristics from the Manga and the Novels' (except for the Anthologies) are allowed to be mentioned here. 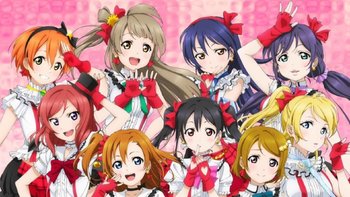 "Making dreams come true with everyone!"

The protagonist idol group hailing from Otonokizaka Academy, which is located between Tokyo's Akihabara, Kanda, and Jinbouchou neighborhoods. Initially starting with three members, they grow in number throughout the first season, finally hitting its final roster of nine members. µ's original purpose was to attract prospective students to enroll at Otonokizaka to prevent it from closing down by taking advantage of the recent trend and popularity of school idols. Pretty soon, they become one of the most popular school idol groups in Japan. 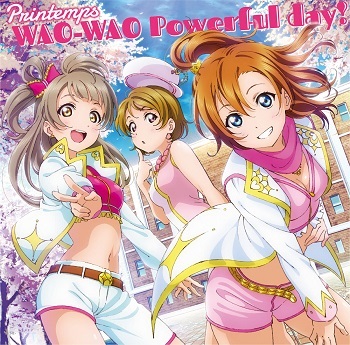 The "Smile" subunit, consisting of Honoka Kosaka, Kotori Minami, and Hanayo Koizumi. Best described as a shoujo (teenage girls) group, with emphasis on Japanese Pop Music and themes of friendship and love.

Leader and founder of µ's, and all-around average student. Inspired by A-RISE, she found the group to save Otonokizaka from closing down. She has a sister, Yukiho, who goes to Otonokizaka Middle School and their parents run a traditional sweets shop, "Homura".

In the manga, she was a star member of the kendo club, but quit to become an idol after seeing an A-RISE concert.

Honoka plays the tomboy angel Kuroiel in The Guided Fate Paradox and reprises the role for The Awakened Fate Ultimatum.

Honoka's and Umi's childhood friend, and the daughter of the headmaster. She designs the group's costumes.

A first-year student who secretly knows a lot regarding school idols and idols in general. She and Rin are best friends. In the manga, they were friends with Honoka before even entering the school.

Hanayo plays the shut-in angel Neliel in The Guided Fate Paradox and reprises the role for The Awakened Fate Ultimatum. 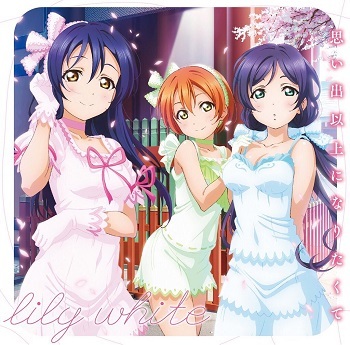 Honoka's and Kotori's childhood friend, and a model student. She's a member of the Archery Club in the anime. She's the group's lyricist and oversees their physical training. Umi's family run a karate dojo.

In the manga, she's the president of the Kendo Club instead, and is quite annoyed when Honoka suddenly resigns from the club to become an idol.

Umi plays the mascot Misery in The Guided Fate Paradox.

Hanayo's childhood and best friend, she is the tomboy of the group. In the manga, she and Hanayo were friends with Honoka before even entering the school.

Eli's best friend, a third year and the vice-president of the Student Council in the anime and School Idol Diary series. Nozomi often had to switch schools because of her parents' work, until she begged to live alone during high school; as such, she doesn't have many friends.

Nozomi is type-cast as the impish angel Cheriel in The Guided Fate Paradox and reprises the role for The Awakened Fate Ultimatum. 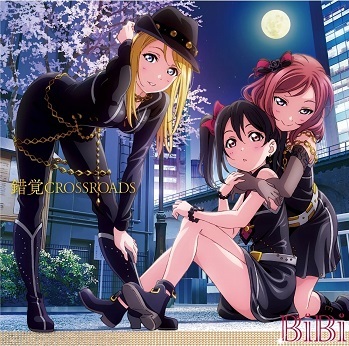 The "Cool" subunit, consisting of Eli Ayase, Maki Nishikino, and Nico Yazawa. Their unique combination allows them to cover a wide range of styles.

A cool quarter-Russian third-year and president of the Student Council. She's the last girl to join µ's and serves as the group's choreographer. Eli has a sister, Alisa, who went to Otonokizaka Middle School.

Eli plays the delusional angel Lanael in The Guided Fate Paradox and reprises the role for The Awakened Fate Ultimatum.

An aloof and standoffish first-year student, aiming to be a physician like her parents, and the main composer for µ's. Her parents own a hospital, so she's quite rich.

The wannabe leader of µ's, as she is the chairman of the Idol Research Club. A third year student.

Nico plays female lead Liliel in The Guided Fate Paradox and reprises the role for The Awakened Fate Ultimatum.