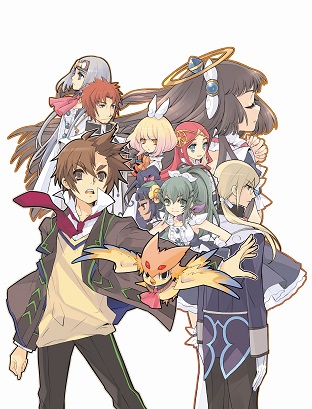 The Guided Fate Paradox (released as The God and Fate Revolution Paradox in Japan) is a roguelike by Nippon Ichi (Team Disgaea, specifically) for the PS3 with character designs and artwork by Noizi Ito of Haruhi Suzumiya and Shakugan no Shana fame. It is first game in Nippon Ichi's Anniversary Project.

Renya Kagurazaka is a typical Unlucky Everydude who wins the position of God in a street raffle. As you do.

As God, Renya is now tasked with the duty of answering the prayers of His creations, may they be animals, humans, extraterrestrials or even fairy-tale characters. To do this, he must use the Fate Revolution Circuit: a mysterious machine of divine origins that creates an astral manifestation of the prayer to be fulfilled, allowing Renya to literally "defeat" the obstacles preventing it from coming true. And if Renya is unable (or unwilling) to answer the prayer, then he will be "consumed" on the spot!

With the aid of seven angels, a bewildered Renya eases into his new role as God and deeper into the mystery of who created the Fate Revolution Circuit and why he would need to be chosen to be The Almighty in the first place.

The gameplay is described as a unique mix of dungeon-crawler and SRPG and utilizes the high-resolution sprites previously seen in Disgaea 4: A Promise Unforgotten. It can be seen as the Spiritual Successor of Zettai Hero Project, except Darker and Edgier with a protagonist who isn't kind of a pathetic loser.

The game was released in Japan in January 2013, with Western releases later that year (October for EU and November for NA).

A sequel titled The Awakened Fate Ultimatum (The God and Fate Cross-Thesis Awakening) was released in Japan in July 2014 and got a Western release in Spring 2015.